Daily Stats:
Time of Departure: 8:20 AM
Departure City: Petaluma, CA @ the KOA (N. of San Francisco)
Time of Arrival: 6:26 PM
Arrival City: Eureka, CA @ the KOA
Total Travel Time: 10 hours  6 minutes (7 hrs 22 min on bike)
TOTAL MILAGE: 320.4 miles
It’s been one week on the road and I can honestly say my butt is finally getting it’s feeling back. Okay, so that might be just a little exaggerated but we have gone over 1700 miles, with more to come.


Today’s ride was pretty simple, quite long, but still simple. We started the morning traveling north and we thought we’d get to Santa Rosa at noon, which it ended up being 9:00 am. So what did we do, we ventured off into the Russian River Valley, which is just more wine country. What was cool though, was that along the road was both Korbel’s vineyard and winery and Martinelli’s winery…talk about the unexpected. We continued for about 25 miles and finally found a place to eat, and we realized that it was easier to continue to the 1 then try and get back onto the 101. So up the coast we went!

The coast line was pretty spectacular and breathtaking, as it has been the entire way, so I didn’t mind the four hour bypass we took :-). I’m pretty sure the bike wasn’t too happy with our choice though.  Along the 1, now called Shoreline highway, were random cow farms (Happy Cows come from California) and I have to say my favorite part of the day was watching this cow buck like a bronco. Here it was just minding it’s own business and we come flying around the corner and scare the shit out of it. I know what your thinking, but it was hilarious and both dad and I were crying, we were laughing so hard. In fact, I still am laughing about it.

We did finally twist our way back to the 101, and by twist, I literally mean we twisted around the mountain. Now on the 101, we continued northbound to Eureka, but we did get an early glimpse of the redwoods, on what is known as the Avenue of the Giants. Though, stupid us didn’t google the drive-thru redwoods, thinking that they are in the National park. In fact, we drove past two of three drive-thru redwoods (one was actually on the Avenue). Dumb, I know. We’re going to back-track the 35 miles tomorrow to drive thru one…just because we can.

We did make it safe and sound to our final destination for the night and decided that the best part of the day, next to the cow, of course, was sitting in the hot tub at the KOA. It got pretty chilly on our drive the last hour as the sun was beginning to set. It’s hard to judge the temperature because one minute we’re sweating and the next we’re freezing.

Tomorrow should be another adventure as we hit the Redwood National Park and journey our way to Gold Beach, Oregon to stay at our friend’s grandparent’s cabin. Stay tuned for more…let week 2 commence!

© Nicole L. and Mapless Adventures, [2009-Present]. Unauthorized use and/or duplication of this material, including photographs, without express and written permission from this blog’s author and/or owner is strictly prohibited. Excerpts and links may be used, provided that full and clear credit is given to Nicole L. and Mapless Adventures with appropriate and specific direction to the original content. 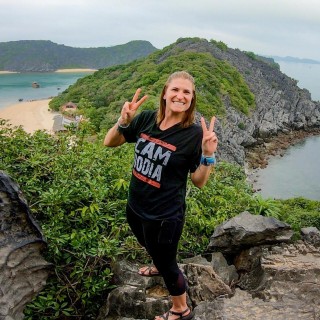